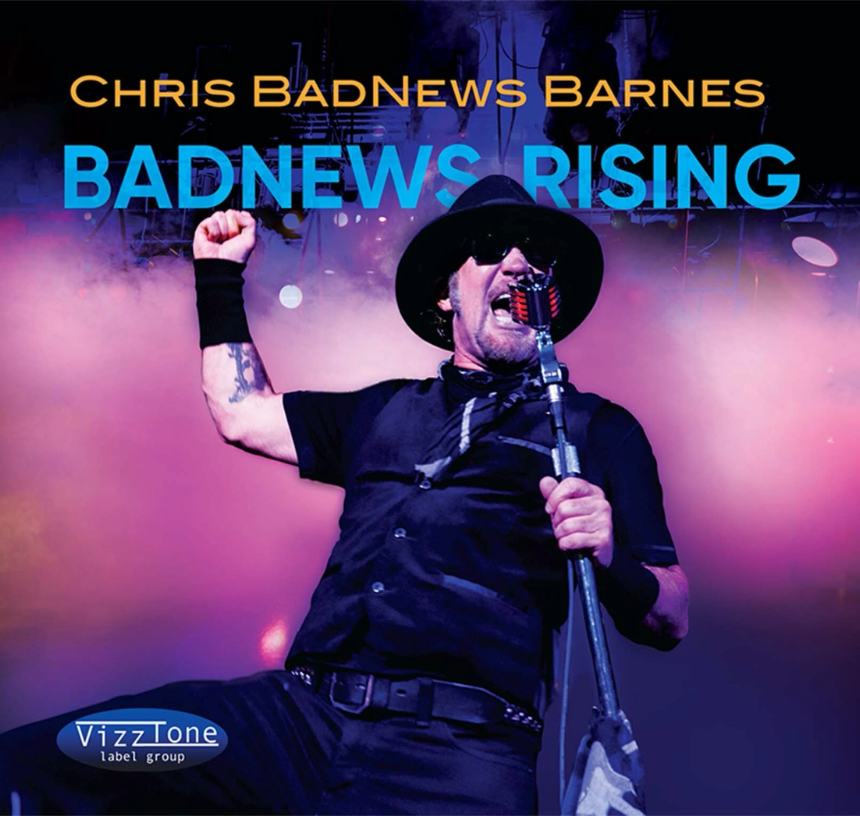 Hokum blues master, vocalist, harmonica player, and television comic, Chris “BadNews” Barnes is dark, jumping, and full of life on his brand new record BadNews Rising. Set to be released on October 1st, 2021 on the VizzTone imprint, the album is Barnes’ first original batch of blues material and was produced by Grammy winner Tom Hambridge (Buddy Guy). Barnes is a former Seinfeld, Curb Your Enthusiasm, 30 Rock, and Carol Burnett television show performer and writer who also has a strong musical talent and an obvious way with words. His songs range in tone from satiric and funny to honest blues to absolutely heartbreaking and back again. His vibe is salacious, borderline outrageous, and full of double entendres and subversive wit that’s reminiscent of Frank Zappa. Barnes is definitely not your normal blues artist but his style and approach to three-chord art and entertainment absolutely deserves recognition in the contemporary scene.

Barnes tracked these new tunes at Nashville’s Sound Stage Studio with a high-powered band made up of Kevin McKendree (Delbert McClinton, Anson Funderburgh) on piano/B3, Tommy MacDonald (Buddy Guy, Johnny Winter) on bass. Pat Buchanan (Cameo, Hall & Oates) on guitar and harmonica, and Tom Hambridge (Buddy Guy, Susan Tedeschi, Roy Buchanan) on drums. As a unit, they pack a considerable punch and have the unspoken know-how to work with an artist who is as uniquely creative as Barnes. His emotional range and presence are both incredibly impressive and, mixed with his witty lyrics, make up one unbeatable performer with his own distinctive style. These days, that’s saying something. 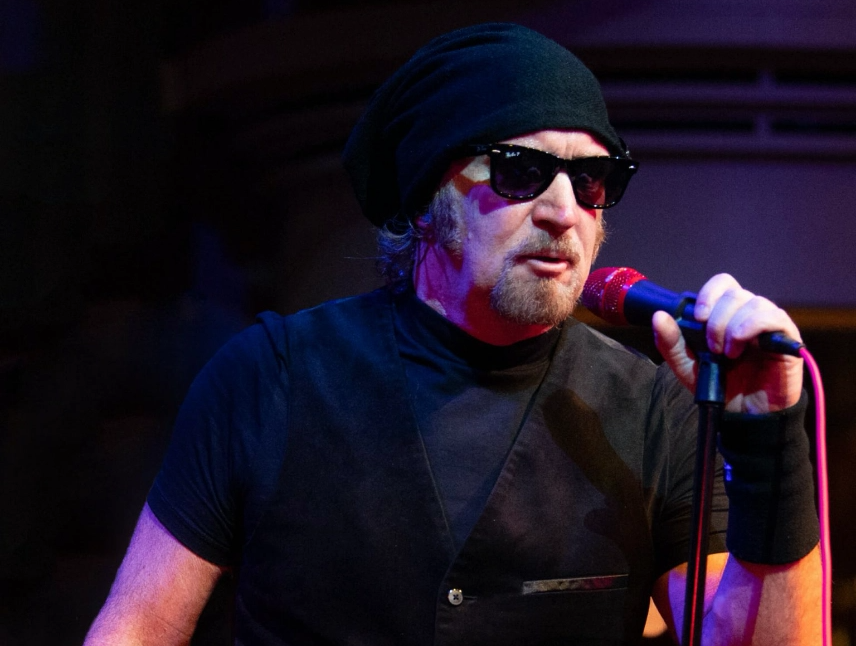 Chris “BadNews” Barnes, a former Seinfeld, Curb Your Enthusiasm, 30 Rock & Carol Burnett television show performer and writer, has made his mark in the blues community with this genre, even being hailed as The King of Hokum Blues by Elmore Magazine. His third VizzTone release, BADNEWS RISING is also his first all-original album filled with satiric muses interlaced with honest, biographical stories.

The album kicks off with “You Wanna Rock? You Gotta Learn the Blues,” co-written by John Hahn. It’s an evil sounding, treacherous track that would have fit right into the soundtrack of Crossroads with no problem. The Ry Cooder-esque slide guitar provided Pat Buchanan (Cameo, Hall & Oates) provides a perfect dark backdrop for Barnes’ green-bullet enhanced vocal. 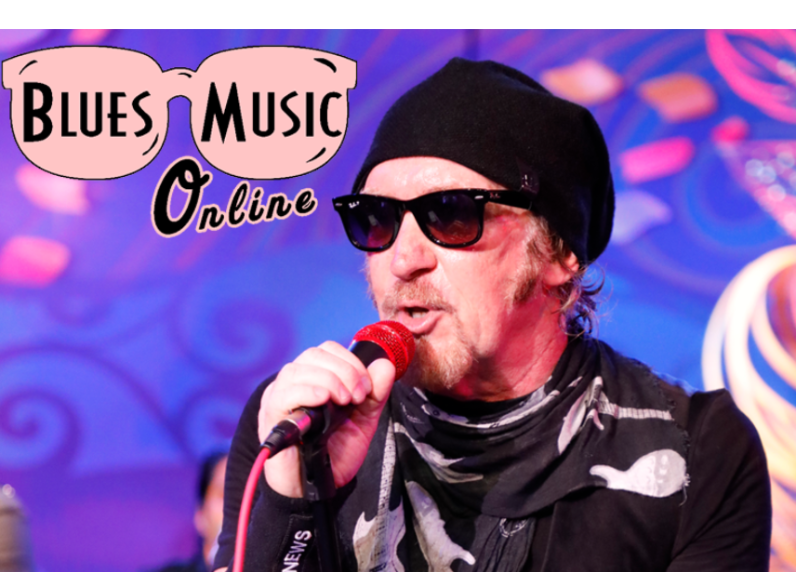 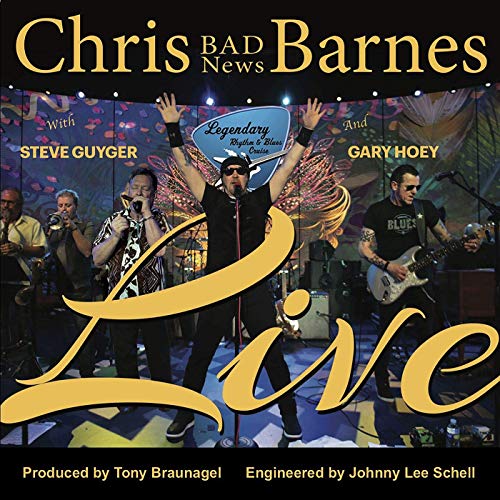 Review: What to say about this guy, a musician who works the comedy and television circuit turning his evidently extraordinary searching eye on occasional, unexpected musical journey when the fancy takes him. Barnes has previously had considerable musical success with his delightful and disarming take on hokum blues, music that more than raises a smile, a nod and a blink of surprise. Here we have him working in a much more serious mode, live on-stage at the Legendary Rhythm & Blues Cruise gig. This album has a touch of unevenness at times but that’s probably to be expected with a live recording in these circumstances.

Barnes has a mastery of stagecraft that is generally widely acknowledged but is too often viewed as a bit of a side-issue when it comes to serious musical endeavor. Here, supported by US harp master, Steve Guyger and the fiery fretwork of Gary Hoey, Barnes delivers a 13-track album that highlights his true musical worth. Produced as a live recording by Grammy-winner Tony Braunagel, Barnes fairly rattles through a range of modern blues classics including “You Can’t Judge A Book By The Cover,” “Hoochie Coochie Man” (maybe the best cut on the album), “It Hurts Me Too” and some of his trademark hokum with an amusingly neat slide into “Hungry & Horny,” a clear, biting parody of Earl King’s “Come On.” 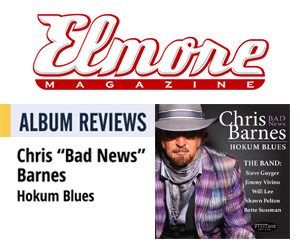 Chris “Bad News” Barnes is pretty much an elemental force, a guy of unexpected musical tastes, thoughts and interests. Often, and certainly self-billed, as the King of Hokum, Barnes is indeed the master of musical hocus-pocus with a sharp eye and ear for the absurd and weirdly witty world around him. His last release, 90 Proof Truth was a liberal tour de force of hokum blues-based delight, a bit of sparkling individuality and flair.

This time around, Barnes is once again sprinkling the release with hard-edged humor and a healthy dose of quality blues backing. Each track has a multi-hued blues strength and feel that make it work for blues fans while also remaining a bit skewed and quirky throughout. This is a guy with a positive self-assurance and confidence that shines out on each of the 14 tracks here. And, as ever, Barnes is joined by some truly top-dollar, all-star band-members from the likes of Van Morrison, Levon Helm and Billy Joel, for backing support. 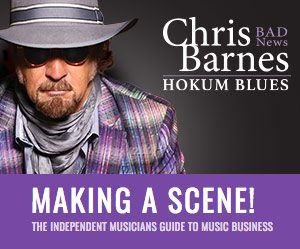 Chris Barnes has been a writer and performer for The Carol Burnett Show, Saturday Night Live, Seinfield, 30 Rock, and Curb Your Enthusiasm. He began his blues music career opening for acts at the legendary blues club, Tramps, where he would take audience suggestions and improvise on blues tunes. In 2015 Barnes released his debut recording “Bad News” Barnes and The Brethren of Blues Band “90 Proof Truth”.

Barnes’ comedic sensibilities are fueled by his appreciation of “Hokum Blues”; humorous songs that use sexual innuendo. His song selection includes older tunes popularized by Hudson Whitaker better known as Tampa Red that date back to the late 1930’s and 1940’s. Other sources of inspiration include the lesser known “Hokum Boys” who recorded between 1929 and 1937. 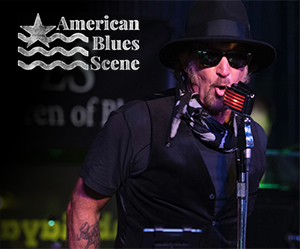 In celebration of the release of his new CD, ‘Hokum Blues,’ Chris sat for an interview with American Blues Scene.
Chris “Bad News” Barnes has been infusing comedy into blues music (or is it the other way around?) since he left his native Scranton, Pennsylvania, for New York City at age 17. He quickly scored a job at Tramps blues club on 15th Street, a very popular venue in the 1970s which hosted the Alligator Records roster among others. Barnes served as the warm-up act for the blues icons who played there.

As a cue for the blues performers to set up onstage at the end of his set, Barnes would improvise a song with his harmonica based on audience suggestions of a woman’s name and a household object, i.e. Alice and frying pan, “Her name was Alice, she was a girl of the land, then she hit me with a hot frying pan.” When legendary drummer Willie “Big Eyes” Smith told Barnes what he was doing was “hokum blues,” Barnes’ fascination with the sub-genre began.

In celebration of the release of his new CD, Hokum Blues, on VizzTone Records, Chris sat for an interview with American Blues Scene to share his observations about how his experiences working as an improvisational comic (Second City), comedy writer (Saturday Night Live), and actor (The Carol Burnett Show, Life With Bonnie, Curb Your Enthusiasm, Thirty Rock) have served him well as a bluesman. 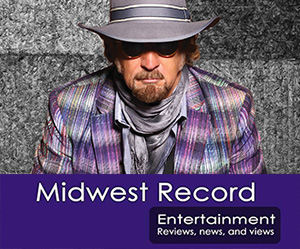 This is no mere white boy with the blues. Barnes works in New York media, as do all his pals on board here, and with nice day jobs, they get to have lots of fun on the side. A lot of lip service is paid to hokum but this date gets down to the original, real hokum—the double entendre loaded barrelhouse blues that was meant to trick whitey with it’s sexual and drug references flying under whitey’s radar. Jumping, humping and rollicking along, this bunch knows how to keep it real but make it contemporary. Even if the moldy figs know all the songs here, this set wasn’t made for them. Selling millions of well known records that were never properly accounted for, this is a wonderful journey through the past that those who don’t require the straight and narrow will covet proudly. Just plain killer stuff you’ll find you can’t get enough of after the first taste.

Barnes’ comedic sensibilities are fueled by his appreciation of “Hokum Blues”; humorous songs that use sexual innuendo. His song selection includes older tunes popularized by Hudson Whitaker better known as Tampa Red that date back to the late 1930’s and 1940’s. Other sources of inspiration include the lesser known “Hokum Boys” who recorded between 1929 and 1937. 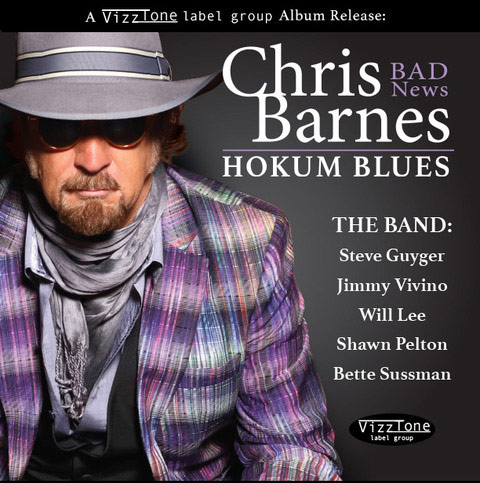 "This is a wonderful combination of Traditional Hokun and Comtemporary Satire made by mighty fine musicians with a love of both. It is Tight Like This, enjoy."
-Bill Wx, Blues Radio Luminary 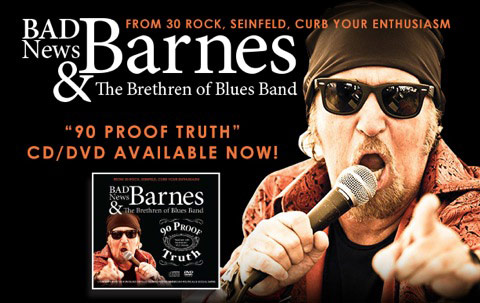 "I Really Like This Disc, Very Funny and Clever with Top Notch Musicians"
-Bill Wax, "The Blues Plate Special" WPFW

"This excellent new alblum has been an authentic and amazing revelations. Ireally like Barnes" personal and satrical treatments of blues classics and his original's sharp compositions are so good, delivering a 360 degrees vision of blues, soul and American Roots Music."
-Roberto Rossi, European Syndicated Radio Host

"With funky grooves, thunderous rhythmic assault and performing in his blood; the most entertaining Blues Releases in Robert History."
-Mark Urichock, Weekender
Northern Pennsylvania's No 1 source for arts and entertainment 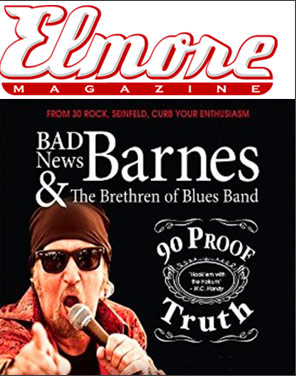 "A dozen tracks of complete hokum, as it clearly says on the album cover, from one of the USA’s finest hoaxers and hoary frontmen. This guy is not just a comic with a challenging sense of humor, he’s also one helluva singer/songwriter with an at times decidedly jaundiced eye on the skewed social and political world of modern America. I have to declare an interest from the very start with this offering: I absolutely love it. It makes me laugh out loud, and the sheer inescapable mastery of the full-tilt, Stax-like horny (pun intended, as Barnes would expect) musical backing makes for totally irresistible stuff."

Barnes crosses genres as easily as he reaches out to cross-dressers, straights and gays with a full-hand of delicious songs. From the opening track, “America Needs A Queen,” with its sublimely comic lyrics demanding a gay leader on top, you know where this collection is likely to take you – a rolling ride of excellent music, packed to bursting with wit and wisdom, sure-fired soul and super sounds. Religion also comes into the firing line with a marvelous number, “Westboro Baptist Blues,” that should carry a health warning along the lines of ‘Do Not Listen While Eating or Drinking’ – for fear of spraying your near neighbors with half-chomped, slurped debris.

A wonderful, fun album with a backing band that includes the likes of the late Lew Soloff on trumpet and around half of the surviving members of Blood, Sweat & Tears, among others. And as a bonus – if such was needed – this is a double CD/DVD release, so you can also watch the mayhem as it unfolds.
-Iain Patience 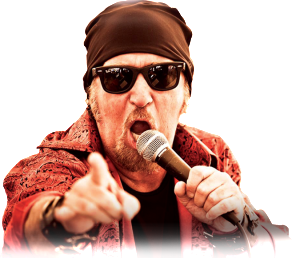 Chris Barnes plays his blues by planting tongue firmly in cheek, and then biting that tongue with heaping sarcasm and wit. Add in a dash of topical social commentary alongside the funky grooves and thunderous rhythmic assault and you’ve got the foundations of one of the most entertaining, if not pertinent, blues/roots releases in recent memory.

As a cue for the blues performers to set up onstage at the end of his set, Barnes would improvise a song with his harmonica based on audience suggestions of a woman’s name and a household object, i.e. Alice and frying pan, “Her name was Alice, she was a girl of the land, then she hit me with a hot frying pan.” When legendary drummer Willie “Big Eyes” Smith told Barnes what he was doing was “hokum blues,” Barnes’ fascination with the sub-genre began.

The Scranton native, who has done NEPA proud for the last 30-plus years as a successful comedian, writer, actor, club owner (he and partner Jacqui are proprietors of the successful gay bars Flaming Saddles in New York and L.A.), and all-around master performer, has just released a blues album under the moniker Bad News Barnes & The Brethren of Blues Band. The album, titled “90 Proof Truth,” is a titanic statement, both lyrically and musically – but that’s nothing new for this outspoken personality.